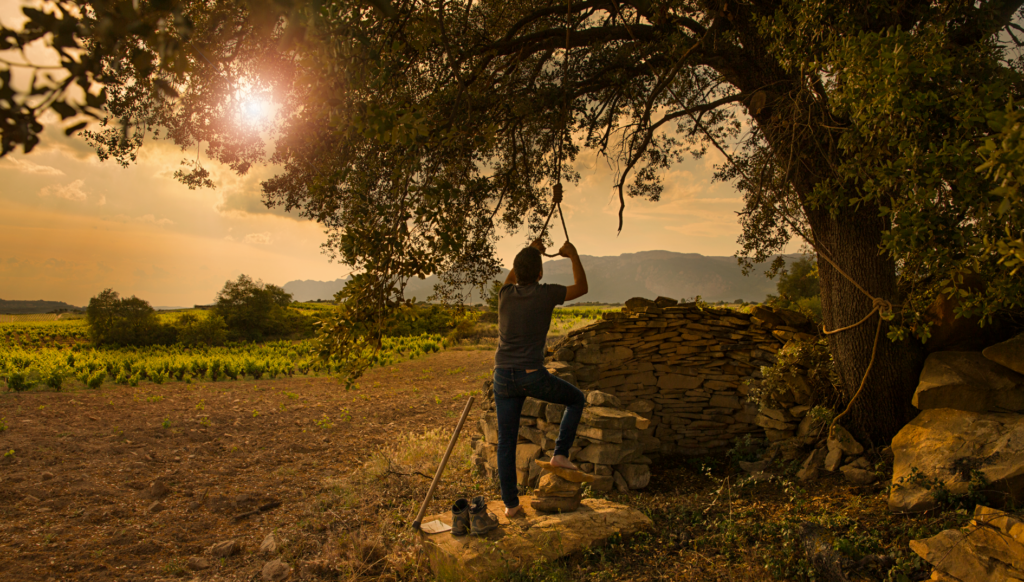 In Rioja, it’s not uncommon for a few big producers to exude almost god-like status. They produce large amounts of wine and their market share is incredibly strong. The style of these large producers is what nearly everyone in Spain deems the standard for Rioja. However, Roberto Olivan, the force behind Tentenublo Wines, is one of the most exciting names among the new generation of winemakers who are more interested in making extraordinary wines from single sites rather than volume blends. He is challenging the preconceived notions of Rioja and tempranillo.

The fruit is sourced from vines which Roberto inherited from his mother and several other plots that he has gathered together around Viñaspre, his home village, near Lanciego in Rioja Alavesa. The high altitude, approximately 620 meters in elevation, helps define the brightly-defined style of his wines.

The name ‘Tentenublo’ comes from the of ringing bells traditionally used  to ward off hailstorms in Rioja, which accounts for the animated bell chasing a hail cloud on the label. The Xérico label is a wonderfully nineteenth century looking masterpiece which has a picture of a different ancestor of Roberto’s in each vintage. The second line he calls Escondite del Ardacho, after a local lizard; consisting of three single vineyard, small production wines.

Tentenublo Blanco is a deep, creamy and mineral wine. On the nose, the aromas of ripe white fruit stand out, with light floral notes. On the palate it is fatty and voluminous, with a great acidity that makes it fresh and a little lively.

Roberto calls this “the free wine from the hamlet of Viñaspre.” Ripe, red fruit with a hint of liquorice over a toasty background. This is a flavorful, honest wine offering a pure expression of the vintage. A terroir-driven Rioja.

Made with fruit sourced from three separate, marl-based vineyard sites in the foothills of the Cantabria Mountains. Tempranillo is blended with the white grape Viura in a manner customary to the Tentenublo estate. Xerico is a fresh, fluid and juicy wine. On the nose, the aromas of fresh red fruit stand out, with spicy notes. On the palate it is intense, with lots of fruit and liveliness. A village wine with a lot of character.

Veriquete is a plot that is just under half a hectare at nearly 600 meters up in the Sierra Cantabria Hills. A blend of Tempranillo, Garnacha, Viura and Malvasia from vines that are between 50-100 years old. It is deep purple and bounds from the glass with blueberry, raspberry and violets. Deeply fruity on the palate with shapely firm tannins and a lovely kick of acidity to balance the whole. A fascinating snap-shot of modern Rioja.

This one-hectare field blend of Garnacha with 10% Tempranillo and Malvasía was planted at the turn of the last century on red clay and sand soils. The resulting wine is rich and well upholstered with plenty of alcohol, a spicy, mulberry core and palate-cleansing acidity. Bold and complex.

Grown 450 meters in altitude and highly influenced by the Mediterranean making for a soft, gentle microclimate which shows in the wine. From 65-year-old vines, planted in a single-vineyard with clay & gravel soils. Wonderful aromas of ripe blackberries warmed by the sun along with more ‘sauvage’ notes of crushed stems and pith on the palate. Medium-bodied with expressive & persistent acidity. Shows incredible potential for aging.